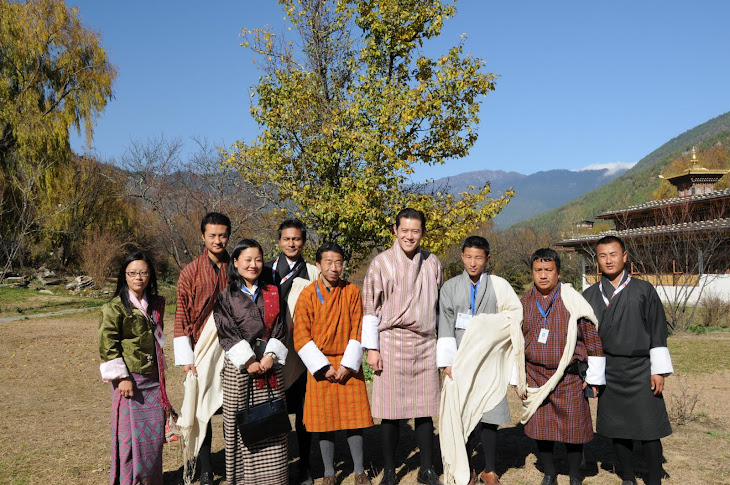 This is a personal weblog. The opinion expressed here represent my own and not those of anybody's unless cited. 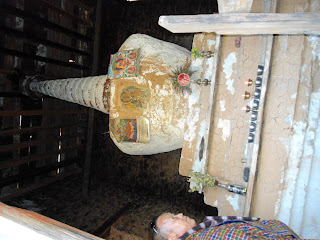 Shar Monpa Phargi Chorten (ཤར་མོན་པ་ཕར་གྱི་མཆོད་རྟེན) is located at Ratswog village in Goensa Chiwog under Nyisho Gewog in Wangdue Phodrang Dzongkhag. The Chorten is very popular and worshiped by everyone in the area because of its sacredness and other religious belief associated with it. But unfortunately, no one in the area including the elders could remember and tell when and who built the Chorten. They were not even able to guess in which century it was built. However, people believe that the Chorten might have been built before the advent of Buddhism in Bhutan during which our country was known as Monyul and people called Monpas.

According to a 44 year old former Gup of Nyisho Gewog, Phurba Dorji, the Chorten was believed to be built by legendary king Sindhu Raja of India. He said that this legendary King came to the place seeking refuge and settled himself in place called Dzongkhey Pongchu (རྫོང་ཁི་སྤོང་ཅུ) where he also ruled the place and the people. He said that Gyelb Sindhu Raja might have built the Chorten during that time. He said that the reasons attributed to the sacredness of this Chorten was that the Chorten has Sangay Yosung’s tooth (སངས་རྒྱས་འོད་སྲུང་གི་ཚེམས) as it main relic.

Phurba Dorji said that their village name actually would have been Raja Wog(ར་ཇྭ་འོག) which literally means under the reign of Raja or King and not as what is presently mispronounced as Ratswog (ར་ཙ་འོག).

According to some old people in the village, they say that the during the reign of first King Gongsar Ugyen Wangchuck, main relics of the Chorten, Sangay Yosung’s tooth was taken out from the Chorten fearing that the relic might get destroyed or lost. They believe that the first hereditary King handed over the relics to Second King and was further handed over to Zhung Dratshang by Her Royal Highness late Ashi Phuntsho Choden Wangchuck and His Holiness Je Thrizur Tenzin Dhendup. Zhung Dratshang displays the relics during the sacred occasions for public even to this day.

The people also relate that Guru Rinpochhe visited the place. According to 51 year old Ap Sigyel, Guru Rinpochhe visited the place and gave Wang (blessings) to the people. He said that when Guru Rinpochhe was trying to produce Drupchhu (Holy water) from the cliff that was located around 20 minutes from the present Chorten, the demons of the area disrupted him by transforming themselves into two giant snakes. Guru Rinpochhe killed the snakes with his Reldri (knife) and kept the carcass of the snake over two sides of outer structure that house the main Chorten thereby protecting it from the evil forces of the place. The carcass of the snakes in the form of stone looking exactly like the real giant snake can be still seen today. (Refer picture)

Regarding the existence of scripts written on the stone, people were not able to confirm it all. They said that other than Mani scripts written on slate, they do not have any idea on existence of other scriptures written on stone.
The sacredness of the Chorten is also referred in the ballad of Pemi Tshewang Tashi where it says that the Chorten was built by Sangay Tong (Thousand Buddha) and if we circumambulate thrice we will be escape from hell.

Like many other Chortens in Bhutan that have been vandalized, this sacred Chorten has also not been spared from the sinful hands of miscreants. According to villagers, an attempt to vandalize the Chorten was made in year 2003 but fortunately it was found that only the outer portion of the stone and mud have been taken out and the inner walls of the Chorten and relics remain intact to this day. The people closed the hole by putting stone and covered it with mud ram.

The people of the Ratswog Village take turns to become the Koenyer (Caretaker) to take care of the very sacred Chorten and offer butter lamps and other routine rituals to the Chorten so that this very important structure, an important heritage is not desecrated. The Chorten is commonly called as Chorten Chen in Ratswog and to others it is popularly known as Shar Monpa Phargi Chorten.
Posted by Gyeltshen at 12:12 AM

Gyeltshen
Wangduephodrang, Bhutan
just an ordinary guy who leads a simple life...before you know me, you might think that i am a SERIOUS guy but when you really know me, i'll prove you WRONG. He is working as an Assistant Planning Officer in Wangduephodrang.He is from Sombaykha in Haa.